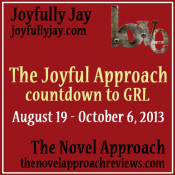 I’m over at Joyfully Jay‘s today, blogging about world building and Stealing the Wind!  One lucky commenter on that post will win a $10 Dreamspinner Press gift certificate, so be sure to stop by and leave a message!

While you’re there, check out the amazing review of Stealing the Wind from yesterday from Jay at Joyfully Jay, as well as the other contests from GayRomLit authors! -Shira

Mermen of Ea: Book One

Taren Laxley has never known anything but life as a slave. When a lusty pirate kidnaps him and holds him prisoner on his ship, Taren embraces the chance to realize his dream of a seagoing life. Not only does the pirate captain offer him freedom in exchange for three years of labor and sexual servitude, but the pleasures Taren finds when he joins the captain and first mate in bed far surpass his greatest fantasies.