Mermen of Ea Series 25% off at Dreamspinner Press!

The entire Mermen of Ea Series is 25% through June 25th at Dreamspinner Press! That’s both ebooks and paperbacks, by the way, in case you prefer your beach read to be a “real” book! And if you’ve read the entire series and still crave a little more, I’ve posted the entire cabin boy free ficlet, Wind and Water, here on my website!

The Mermen of Ea stories are romance above everything, but they also combine mystery, magic, and adventure. Think along the lines of Lord of the Rings and other fantasy series, but with an HEA (always!).

I’m so excited to share the complete saga of my mermen, and I’m thrilled to see all the wonderful reviews for the series and this last book! Don’t forget to enter the blog tour contest to win some cool mer-themed prizes (and there are prizes for non-US entrants as well, including an audiobook copy of Stealing the Wind! Here’s the link to the giveaway:

You can read an excerpt from Running with the Wind below (spoiler warning for books 1 and 2!). Happy reading! -Shira 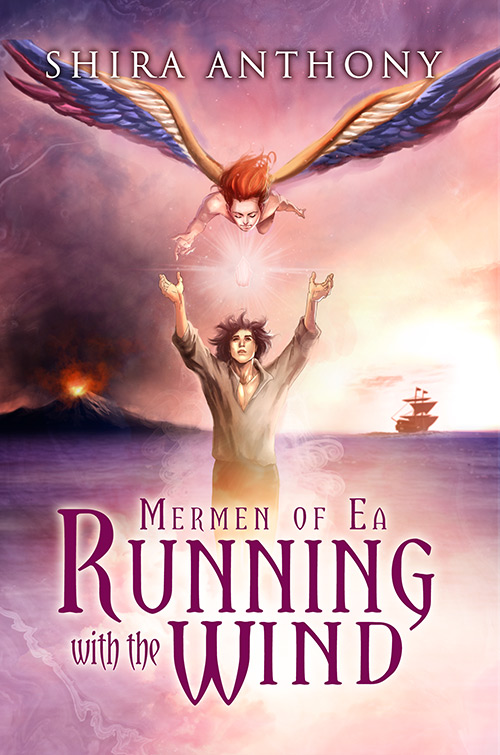 5 stars – “I’ve never been a fan of fantasy, yet this fantasy series ranks high on my list of all-time favorite series, and I can’t recommend it highly enough to all lovers of M/M romance.” -Barb

5-stars. “Running” is smart and fun, not to mention well-written. And, *gasp*, the intricate plot actually makes sense, so I was engrossed from start to finish.” -Todd 5 pink shells – “After all the anguish and uncertainty from Into the Wind, we get to finally know all the turns in Taren and Ian’s life to fulfill their Destiny, and wow, I couldn’t put this book down… My heart went out to Ian and Taren, while they tried to put their fears and doubts to rest and trust in their bond, in the love, so prepare yourself for one more great ride through the EA world.“ Here’s the list of blogs participating in the tour and links:

Excerpt from Chapter One

Ian leaned over the railing as the morning sunlight warmed his shoulders. A few feet away, Taren wrapped a blanket around the shivering boy, who sat with his knees hugged to his chest. He tenderly ruffled the boy’s fiery red hair. The boy leaned into Taren’s touch and made a satisfied sound much like the purr of a cat.

Not a boy, Ian reminded himself. Bastian. An Anuki. The heavenly brethren of the Ea. A dragon shifter reborn from the ashes. True, this freckle-faced dragon child looked nothing like the full-fledged beast who’d nearly killed them the day before, but they knew little of the Anuki. Had it only been a day since Seria’s men had attacked them and they’d lost Rider to Seria’s bullet?

Ian met Taren’s gaze and his grief eased slightly. Taren smiled back, his warm brown eyes hooded with exhaustion and grief, his shoulder-length hair having dried in a tumble of waves. From where he sat on the deck, Bastian watched Odhrán, keenly interested. The sphere they’d discovered not long after the destruction of the Sea Witch—an egg, Ian now knew—had dissolved beneath the water. Bastian had been choking and spluttering when Odhrán had carried him aboard. Since then, Bastian had done little but watch Odhrán with rapt attention.

Like a baby bird watches its mother. Ian frowned at his folly. How easy it was to forget this pathetic creature had destroyed the Sea Witch and nearly killed them all. If Odhrán hadn’t killed the dragon Bastian had become, they’d all have died. And yet Bastian had been reborn.

Bastian glanced up at Taren, blinked several times, then shifted his gaze back to Odhrán, who spoke in hushed tones to one of his crew. The long blond braid down Odhrán’s back dripped onto the deck and left the back of his woolen jacket sodden. Despite the bright blue of his eyes and his youthful features, Odhrán appeared as exhausted as Ian felt.

“A moment of your time?” Ian said after the crewmember trotted off toward the stairs, leaving the four of them alone on the foredeck.

“Do you think this is wise?” Ian asked with a quick glance back at Taren and Bastian.

“What would you have me do? Leave him to drown?” Odhrán, too, appeared weary. Ian knew he still regretted having killed the fully transformed Bastian.

“He couldn’t live without Rider.” Taren’s words echoed in Ian’s mind. Rider—Ian’s oldest friend—had taken a bullet in Ian’s stead. There’d been no time to grieve.

“No.” Ian sighed. “Rider would have wanted us to care for him.” Taren would never have forgiven him for suggesting they leave Bastian to drown, and they’d lost too much to even consider it.

Odhrán nodded curtly and turned his gaze eastward. Now calm in the wake of the storm, the water sparkled with sunlight. Nothing remained of the Sea Witch but a few bits of broken timbers floating restlessly on the waves. Later, all of the men now aboard the Chimera would gather on the deck to remember the Witch’s captain, but for just a moment, Ian could almost imagine Rider at the wheel of his beloved ship.

I’ll miss you, old friend. More than you’ll ever know.

Ian shrugged off his dark thoughts and walked back to Taren. “You should get some sleep.” He squeezed Taren’s shoulder. “Odhrán and I will not let Bastian out of our sight.”

Taren pressed his lips together and nodded. How tired Taren must be that he didn’t even argue!

“I’ll join you in a bit.” Ian pressed his lips to Taren’s warm cheek.

Taren retrieved the blanket that had fallen off Bastian’s shoulders and wrapped it around him again. Naked as Bastian was beneath, Ian caught a glimpse of the wings they’d seen when they’d discovered him on the ocean floor. No longer scaled as they’d been when they’d first pulled Bastian from the water, Bastian’s wings were now covered with feathers and shimmered red, yellow, orange, and fuchsia, iridescent in the sunlight.

“I’ll be back later,” Taren told Bastian with a barely repressed yawn. “I promise.”

Bastian’s eyes revealed little understanding. Had he forgotten everything of his former life? Perhaps he was still too overwhelmed from the shock of the past day’s events to fully comprehend his situation. He’d not uttered a word since they’d brought him aboard.

Taren kissed Ian—a fleeting kiss, but one Ian needed to reassure himself that all had not changed—before heading belowdecks to rest.

Ian met Odhrán at the bow. “He’s like a fledgling,” Ian said, inclining his head in Bastian’s direction, “watching you like a bird might his mother.”

Odhrán’s brow knitted. He’d clearly noticed it as well. “I’ve asked Garan to reinforce the enchantments on the ship’s masts and sails. There’s nothing more to be done.”

“Aye. But if Bastian threatens the ship—”

“Then I’ll be forced to subdue him. Not a prospect I relish, although in his current state, he appears far less powerful than before.” Odhrán studied Bastian once again. “For now, at least, he’s content to be in our company.”

“What do you know of the Anuki?”

“They’re much like the Ea in their ability to shift to human form. I met one centuries ago, but he was nothing like this. Not a child. But what happened with Bastian….”

“Reborn from the ashes.” Ian’s heart ached once again for the loss of Rider.

“My time with one of their kind was brief.” Odhrán stared past Ian as if remembering.

Ian didn’t press the issue. Later, perhaps, he’d ask Odhrán about that encounter. “And his memories of his life with Rider?”

Odhrán shook his head. “I don’t know. I suppose only time will tell.”

Ian clenched his jaw. The realization that Bastian might not remember anything of his love for Rider made Ian’s grief that much greater.