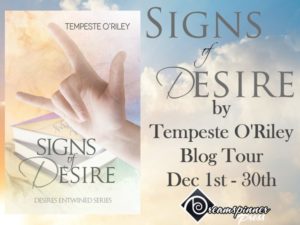 Welcome Tempeste and congratulations on your new release! Tempeste has a great answer about writing characters to share with us today.

Don’t forget to read down to the bottom of the post for an excerpt from Signs of Desire and a cool giveaway! Take it away, Tempeste! -Shira

Do characters and stories just pop into your head, or do you take your time thinking about them? And how do you make your characters believable?

For the most part, they just show up in my head one day. They move in, without my say so, and often without my knowledge until they’re just “there” :/ LOL It’s sort of annoying, honestly. You’re going about your business or sleeping or whatever and suddenly this ‘person’ and their story invades your life, insisting on having you writing instead of whatever you were doing. Mind you, I love writing, but with my health, interrupting my sleep is never appreciated!

As for making the characters believable… that comes from the fact they are just people. Yes, I ‘make’ them up and all, but really, they are just like the guy down the street or your neighbour or your professor or… … …. I try to make sure that even when my characters are paranormal, they are still rooted in the real and normal enough that you could meet them on the street and it not be odd. I want you to read the story and see you within (and find hope, love, joy, etc. as well).

I do take a lot of time working on character development, but honestly, I find out a lot about them as I write the stories. Often I don’t have a clue what’s going to happen or what they will do until it happens and I’ve typed the scene. They take me on the ride just as the story takes you along. 😀

When a night out turns into a matchmaking scheme, they thought communication would be their biggest challenge to their happily ever after…. 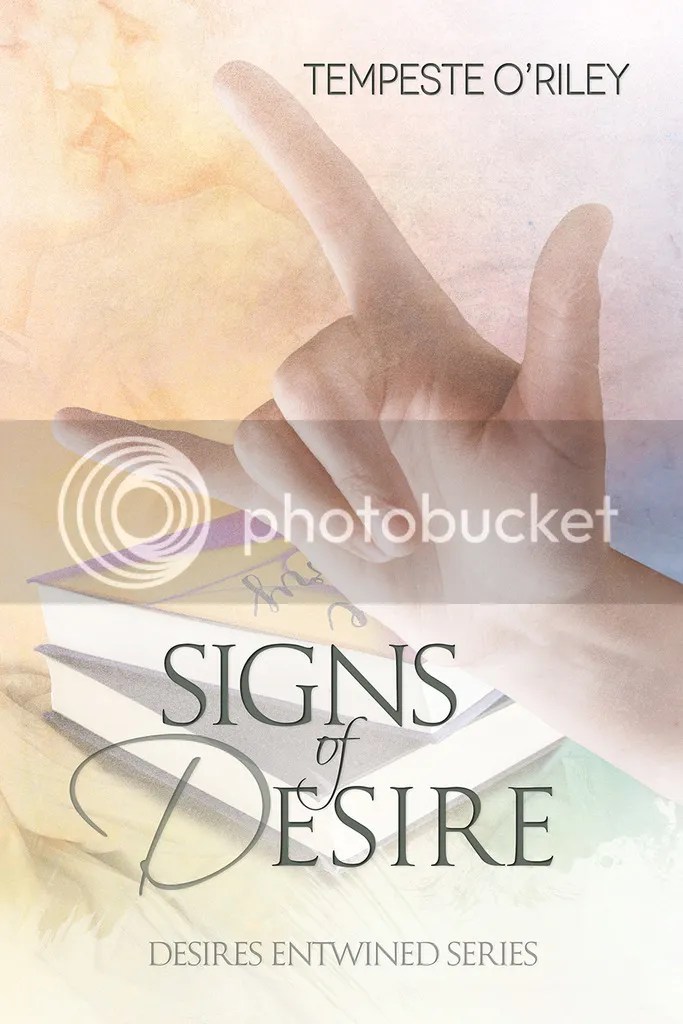 Simon Tyler knows his job as a gay romance author makes his lack of faith in love more than a little ironic, but he’s tired of being used for his wallet. When a night out turns into a matchmaking scheme orchestrated by his best friends—though he’s not the target—Simon’s not thrilled, but since he’s sworn off happily-ever-after anyway, he goes along with it… until he meets the object of their efforts, Adrian, and finds perhaps he hasn’t given up on love after all.

Professor Adrian Keys has tried to date hearing men before, but being deaf himself, he’s never had any success at making a connection. After his friends con him into going out and Adrian realizes it’s all an elaborate plan to set him up, he braces for yet another failure, only to discover there is a spark—except it’s not with the man his friends had in mind, but with Simon Tyler instead.

Not all their friends have found a way past their romantic failures, but Simon and Adrian might be on the path to happily-ever-after.

They all debated what to eat and chatted for a little, Adrian mostly staying quiet and watching the others. He noticed one of the other men seemed just as out of it as he was, the one Chase had called Grayson. He was handsome, tall, and powerful like Rhys, but he had long black hair, deeply tanned skin, and light brown eyes that were almost amber. He was a little thinner than Chase’s partner, though just as intimidating a presence.

The other man who caught his attention was named Simon. Adrian knew a little more about him because Chase spoke of his closest friends often, and Adrian loved meeting Chase’s friends even if the outing was nerve-racking. Simon had light brown hair, big puppy brown eyes, and a slender body. The longer Adrian looked, the more he wondered how Simon would look when dressed in something a little less bulky.

A tap to his shoulder pulled Adrian out of his musings. He turned and realized the server was back with their dinners and blushed at how entranced he’d been. He didn’t usually stare, hating when others did that to him. “Sorry.”

“No sorrys.” Chase hugged Adrian, then dug into his bowl of chicken and dumplings.

Simon waved to get Adrian’s attention and smiled when he looked up from his country-fried steak and mashed potatoes with white gravy. “Chase said you were his teacher before and are now a friend.” Adrian nodded. “How’d he convince you to go out with his skinny butt?”

“I love your laugh, by the way. It’s deep like your voice, kind of carefree.” Simon looked slightly sad. Adrian knew he’d had a hard time lately. Chase said he’d been cheated on a year ago and had refused to date since. Adrian knew the feeling, though he pushed the thought away, hoping not to dwell on why he was alone.

He ducked his head slightly. “Thanks? I don’t know how anyone sounds, even myself, so it’s always weird to get comments like that.”

“I said the same when we went out,” Chase commented. “But don’t let him fool you. He’s an excellent teacher and speaks in all his classes. He knows his voice is good.”

“No, I know it’s clear enough for you to understand. That’s something I work hard to make true, but I have never heard my voice, so I have no idea how I sound. And well…. Chase was the first person to ever say something like that.”

He worked regularly with various computer programs to improve and maintain his speech, knowing if he didn’t it could cost him his position at the college. He had always struggled to make sure he spoke well for Hearing people, considering his family’s opinion of his Deafness. His dad knew sign

language, but his mom refused to learn, insisting he learn to be “normal.” Adrian had always thought that was extremely unfair, especially as a child. Considering his hatred of being dependent on others for his communication, he was thankful he could read lips and speak as well as he did.

“Then you know the wrong people, ’cause he’s right.” Simon nodded to emphasize his point, confusing Adrian more. Why would he be so determined with his compliments?

Shrugging off his curiosity, Adrian tried to push past the topic. “What do you do?”

Simon’s eyes tightened at the edges slightly, his shoulders drooping a little more. “I’m a writer.”

“He’s a romance author, and a damn good one,” Jamie, or James as he knew the guy’s actual name was, said. Chase talked about his best friend often, though this was the first they’d met. “Don’t let him talk down about what he does.”

“James, hush. He’s not interested in what kind of writing I do.”

“Yes, I am. I love to read. Would I know any of your work?” Adrian didn’t have a large collection of romances, but he had read some. He couldn’t think of any authors named Simon, though.

“You’re an author?” Grayson asked, turning to join their conversation.

The nod seemed reluctant, but the smile on Simon’s face, while small, looked genuine. “Yeah, I write under the name Tyler Jacobs, a pseudonym, but I have a few books out. But, um, I thought we were trying to get to know Adrian and Grayson, not more about boring ol’ me.”

“I found it a beautiful tale of unhappiness changed to romance and then love with a happy ending.”

“Designs of Desire is a tough realistic book that is touched by violence countered by the growing love between the two heroes.”

—Sensual Reads, on “Designs of Desire”

“It’s a great book to fall into and enjoy some really good characters.”

“This is my favorite in this series so far. I love seeing how these characters are growing, all of them. As individuals, as couples, as friends, and as a family.”

“The writer did an excellent job with the characters, they are likable and perfect. Not perfect in the way that they have no flaws, but in a way that they grab you and complement each other.”

Other Works by Author:

*shorts in series +shorts in anthologies

Tempeste O’Riley is an out and proud pansexual genderfluid whose best friend growing up had the courage to do what they couldn’t—defy the hate and come out. He has been their hero ever since.

Tempe is a hopeless romantic who loves strong relationships and happily-ever-afters. Though new to writing M/M, they has done many things in their life, yet writing has always drawn them back—no matter what else life has thrown their way. They counts her friends, family, and Muse as their greatest blessings in life. They lives in Wisconsin with their children, reading, writing, and enjoying life.

Tempe is also a proud PAN member of Romance Writers of America®, WisRWA, and Rainbow Romance Writers. Tempe’s preferred pronouns are they/them/their/theirs/themselves. To learn more about Tempeste and their writing, visit http://tempesteoriley.com.