Back by popular demand! Now that the Mermen of Ea Series is complete both in book and 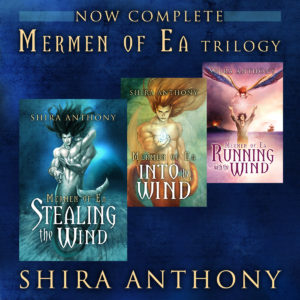 audiobook formats, I thought it would be fun to revisit one of the most popular posts on my blog. Yep. You got it. The merman sex blog post.

When I’m at conferences or even online chatting about my books, the question of how mermen “do it” invariably arises. It’s a question I spent some time answering, and, believe it or not, researching.

I haven’t read a lot of “shifter” books, but I started writing the Mermen of Ea Series, I knew I wanted the two main characters, Taren and Ian, to have sex in their shifted form. Because at its core, the Mermen of Ea Series is a love story and, well, people in love do have sex. (I know you’re shocked!). I’ve never been very shy about writing explicit sex in my books. Frankly, it’s no surprise that men in love (or lust) have sex. In all of my books, I write explicit sex, in large part because

I see it as a way to develop the emotional relationship between my characters. Rarely will I write a sex scene just for the titillation factor. So when I decided to write merman sex, I knew it needed to be more than just “insert tab A into slot B” sex. It needed to have a visceral connection to the characters and to the ocean they inhabit when in their shifted forms.

The mermen of Ea (Ea, pronounced “Ey-ah”, is the name the mermen give their race), are powerful beings in their shifted forms. Broader and more muscled than when in their human forms, they are also highly sexual when they transform. For the two main characters in the Mermen of Ea Series, Ian and Taren, the sex comes out of their deep, enduring connection (they are reincarnated lovers who find each other again).

So, let’s get down to basics. How does merman sex work? I based my mermen not on fish (let’s face it, fish just aren’t that sexy!) but on dolphins, since they’re mammals like

humans. So the sexy bits are really the same, regardless of their form. The difference is that, in their mermen forms, Taren and Ian have sheathed penises, rather than external ones. Just like dolphins, a little arousal coaxes the penis from its fold in the merman’s tail (dogs are similar in this way). So that’s the basic premise. But the fun part (in my opinion), comes in the way mermen have sex.

Mermen, much like dolphins, have a mating dance or ritual. Yes, I studied dolphin sex videos on the web! You’ll find lots of them because dolphins really like to have sex, and parents like to video their kids at aquariums (which can make for some awkward moments when Little Johnny points and says, “Mommy, what’s that thing that just popped out of the dolphin’s tail?”). Here’s a link to one of the videos, in case you’re interested. Back to the dance, though….

Mermen, like their dolphin cousins, swim in circles around each other in a mating dance. They nip playfully at each other, brush their lips against each other’s skin, and even use 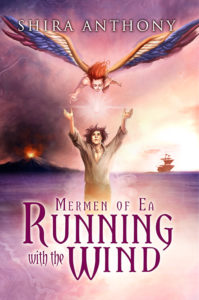 the sharp barbs at the end of their wrists to gently scrape at each other and arouse their mates. And, my favorite part, borrowing a bit from whales: mermen sing. Yes, sing. Their heartsong can’t be heard above the water, but it’s a beautiful and haunting melody that adds to the romance of their sexual contact.

One last bit to share about merman sex? Mermen communicate telepathically under the water, since sound doesn’t travel easily there. And added benefit of this? When one merman climaxes, his partner experiences the orgasm as if he himself is climaxing. Double the fun.

I’ll leave you with a partial NSFW merman sex excerpt from Chapter 2 of Into the Wind, the sequel to Stealing the Wind (yes, there’s more to the scene, but you’ll have to read the book to see how it ends!). In this scene, Taren and his soul mate, Ian, play underneath the water in a moment of calm before the storm.

The Mermen of Ea books are high fantasy and high romance set on the high seas (and beneath them!). I hope you’ll join me on the epic journey of Taren and Ian, as they fight for their own future and the future of their people, the mermen of Ea. –Shira

Excerpt from Into the Wind (Mermen of Ea #2)

Ian moaned as Taren slipped a finger inside the opening at the base of his tail to coax forth his member. When it emerged, hard and proud, Taren took it in his mouth, ran his tongue over its veined surface, then swallowed it until his lips met the base. As he pulled and teased, he pressed a finger in Ian’s other fold. Ian keened to meet the intruder and begged Taren for more as Taren slipped a second finger inside to Ian’s stuttered gasp. Taren knew Ian loved it when he directed their lovemaking, although Taren preferred to take a less aggressive role. It sometimes surprised Taren, though, how Ian was able to cede control to him.

For Taren, the balance of power between them felt familiar. Taren guessed that he and Ian had tangled like this before, shifted in and out of dominance in their relationship as well as in their mating. Taren knew his prior life guided him, but much of what he shared with Ian still felt new and exciting. As he often did, Taren gave himself over to the memory and allowed his body to dictate his movements. He reached around Ian and clasped the place where his buttocks would have been had he been in his human form. The skin there was smooth and slippery, so Taren dug in his nails just deeply enough to maintain his grip. Ian’s rumbled pleasure was an added incentive.

“Taren!” Ian writhed under Taren’s ministrations, his movements propelling them forward and making them spin.

Tiny bubbles effervesced over Taren’s sensitive skin, tickling and caressing, adding to the hypnotic mating dance, stirring his desire. He sucked harder and slipped a third finger inside Ian.

Ian’s climax washed over them both. With each gasp, with each shudder of Ian’s body, Taren felt the thrill of Ian’s release as if it were his own. He wondered if he’d ever get used to the sensation of sharing in his lover’s climax or if it would remain one of the great wonders of his dual form.

“Fuck me,” Ian gasped as he convulsed once again. “Do it now.” Rarely did Ian ask Taren to take him, although this also felt familiar.

Taren caught his breath and pinned Ian against the sand by his wrists. Ian’s eyes were glassy from his release, his breathing shallow. Taren sucked and bit at his nipples, then smiled broadly as he felt Ian’s heart race at the contact.