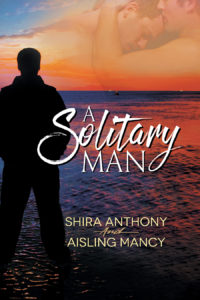 You can preorder A Solitary Man for 25% off in both paperback and ebook at Dreamspinner Press right now. Written with the wonderful Aisling Mancy (aka Cody Kennedy), A Solitary Man is an action-packed, sexy thriller set in the heat of a North Carolina summer. The book will be released by Dreamspinner Press on November 6th, so less than 2 weeks now!

Here’s an excerpt from Chapter 4:

Evan sat in the parking lot of the bar, fingers clenched around the steering wheel. Faison had pushed him to his limits. It pissed him off beyond reason how the man blew off the important stuff and focused only on what would help move his political career forward. Evan had never liked politicians. Even the DA before Faison, who now had a seat in the state senate, hadn’t been anything to write home about, but at least he hadn’t made Evan want to scream in frustration. With Faison, Evan felt he was spinning his wheels, where before he’d at least made progress toward cracking down on drug suppliers. Too many people—kids in particular—were falling victim to the drugs they should have taken off the street. Evan hated that, and he’d come to hate Faison for doing so little about it. Worse still, Faison had done nothing at all to make a dent in the problem but wasted no time distorting facts in order to spin things for his next campaign. Hypocrisy at its finest.

Breathe. Normally Evan let Faison’s bullshit roll off his back. But when Faison blew off the things that were important to Evan, the frustration he’d felt as a child and the accompanying rage came roaring back. Faison didn’t give a crap about illegal drugs, but those drugs had nearly destroyed Evan’s life.

The other thing that worked for him when he felt as though he might spontaneously erupt into flames?

Evan smiled and eyed the sign over the entrance to the bar. It read The Velvet Lounge. Wilmington was just far enough from Dare’s Landing that he didn’t have to worry about being seen. He kept his head down and his sex life firmly in the closet. Faison and his political backers probably couldn’t fire him for being queer, but he didn’t need the bullshit that came with being out. He’d had enough bullshit to last him several lifetimes already. The inside of his closet was perfectly comfortable, regardless of who they married at city hall these days.

The bouncer nodded to Evan as he walked inside. The sound of Easton Corbin’s “Baby Be My Love Song” hit him at the same time the icy-cold air conditioning blasted him, and the sweat-soaked curls at the back of his neck gave rise to goose bumps. Nothing like August in North Carolina. Hot, muggy. Vacation Bible school over. Pulled pork and a gallon of sweet tea. If things slowed down at the office, he’d take next weekend and sail his boat to Cape Lookout, have fresh fish for dinner, and sleep under the stars.

The thought of work had him clenching his jaw again. He forced himself to breathe deeply and took a seat at the corner of the bar. Trading his expensive suit for a button-down and jeans had done little to erase his frustration. He needed something stronger.

“Patrón Silver and a Bud.” He drank the shot as soon as the bartender set it down, ordered another, and took a pull of beer. He welcomed the tendrils of alcohol that eased his tight shoulder muscles.

Satisfied the evening was getting better, he glanced around the bar. The place wasn’t a dive, but it wasn’t what Evan would have called upscale either. The paneling was dark and weathered; the polished wood floor reflected the track lighting. A dozen tables, all of them occupied on a Friday evening. Country music played in the background, something Evan didn’t recognize but that reminded him of the songs his mother had played when he was young. Over on the tiny platform that served as a stage, someone had begun to set up for the live band that would play later in the evening. It was too early for live music, but not too early for what Evan had come looking for.

He nodded to a few familiar faces—Evan didn’t do repeats—then checked out the new ones. A ginger with a bit of a paunch at the end of the bar. A twink giggling and sipping on an umbrella-laden drink at one of the nearby tables. A man with a dark ponytail seated at the middle of the bar sucking on an imported beer, the corded muscles of his arms straining against the fabric of his dark blue T-shirt. Lean, thirtyish, with the honeyed skin of someone who spent a great deal of time outdoors. Surfer, here to improve his “broceanography” at Wrightsville Beach, Evan concluded. Since the Nat Geo article, he’d seen a lot more of them. Even better? The guy was looking back at him.

Evan raised his beer and nodded. The guy nodded back and Evan walked over. “Hey.”

“Hey.” The smile that lit the man’s face made his green eyes sparkle. Evan couldn’t quite place the accent. Definitely not Southern.

The man flagged down the bartender, who had just set Evan’s second shot in front of him. “Two of what he’s drinking, on me.”

“Thanks.” Evan set his empty on the bar and leaned languidly on the edge.

Evan nodded. He only used the name at bars, but it was his first name. “My mother had a twisted sense of humor.” And a serious coke addiction, but he wasn’t going to share that.

Xav raised a quizzical eyebrow. Evan didn’t care if Xav wanted to know more. He downed the second shot and shed his Evan persona the way he’d shed his suit. For tonight, he was Chance. Evan and all his crap could wait until the morning.

“You from around here?” Chance asked as he sat next to Xav.

Chance could work with that. Didn’t matter given his no-repeat policy.

“Grew up in Bertie,” Chance said truthfully. “Near the Virginia border.”

The bartender set their drinks in front of them. “Never heard of it.” Xav’s words didn’t seem to judge, just state a fact.

“Half the people in the state haven’t.” Chance picked up one of the beer bottles and handed it to Xav, the brush of his fingertips against Xav’s calculated. Xav’s short intake of breath pleased him, Xav’s fingers lingering just slightly too long against Chance’s. Years ago, Chance might have looked away. But he’d come to enjoy the self-confidence and power he felt when he didn’t back down, much as he’d come to enjoy locking horns with defense counsel in court.

Xav didn’t look away either.

Nice. His past few hookups here had been low-key—translate: jejune. This one held more promise.

Someone at one of the tables laughed, and the sound of a guitar being tuned mingled with the clanking of beer bottles. Chance hoped they’d be out of there before the music started. He wasn’t in the mood.

Chance went to pull his wallet from his pocket, but Xav stood and leaned over him and handed the bartender a few bills before Chance could extricate it. Nicely done. Chance caught a whiff of cologne, subtle and citrusy. From his close vantage point, Chance watched the rhythmic pulse of a vein beneath Xav’s chin.

Chance stood straighter, his hard cock straining against the heavy fabric of his jeans. “Thanks.”

Xav didn’t cede any territory as Chance stood, his shoulder pressing against Xav’s chest. Chance hadn’t realized the man stood nearly half a head taller. Chance clenched his jaw and felt his shoulders and neck tense as he fought the urge to shove Xav out of his personal space. He didn’t like it when people got too close to him. The only exception was when he was getting laid. He took a slow breath, met Xav’s eyes, then moved away and downed his second beer. “I’ll follow you,” he said.

About A Solitary Man

Xavier is a former FBI agent turned deputy sheriff who is hot on the trail of a South American child prostitution ring. Evan is fighting to put an end to rampant cocaine trafficking and chafing under the thumb of an election-hungry boss. When someone tries to kill the thirteen-year-old witness who holds the key to both their investigations, they’re forced to work together as they put their lives on the line to protect him. As Chance and Xav collide in heat of a sweltering North Carolina summer, dodging bullets and chasing bad guys isn’t the only action going on.

Shira loves a great happily-ever-after and never writes a story without one. She’s happy to write what her muse tells her, whether it’s fantasy, sci fi, paranormal, or contemporary romance. She particularly loves writing series, because she thinks of her characters as old friends and she wants to visit them even after their stories are told.

In real life, Shira sang professionally for 14 years, and she currently works as a public sector attorney advocating for children. She’s happy to have made writing her second full-time job, even if it means she rarely has time to watch TV or go to the movies.

Shira writes about the things she knows and loves, whether it’s music and musicians, the ocean, or the places she’s lived or traveled to. She spent her middle school years living in France, and tries to visit as often as she can.

Shira and her husband spend as many weekends as they can aboard their 36′ catamaran sailboat, “Lands Zen,” at the Carolina Coast. Not only has sailing inspired her to write about pirates and mermen, her sailboat is her favorite place to write. And although the only mermen she’s found to date are in her own imagination, she keeps a sharp lookout for them when she’s on the water.

Aisling is an author who lives, most of the time, on the West Coast of the United States. Aisling writes adult fantasy, adult LGBTQIA romance, and fiction for gay young adults (C. Kennedy).

Raised on the mean streets and back lots of Hollywood by a Yoda-look-alike grandfather, Aisling doesn’t conform, doesn’t fit in, is epic awkward, and lives to perfect a deep-seated oppositional defiance disorder. In a constant state of fascination with the trivial, Aisling contemplates such weighty questions as If time and space are curved, then where do all the straight people come from? When not writing, Aisling can be found taming waves on western shores, pondering the nutritional value of sunsets, appreciating the much maligned dandelion, unhooking guide ropes from stanchions, and marveling at all things ordinary.

Aisling does respond to emails because, after all, it is all about you, the reader