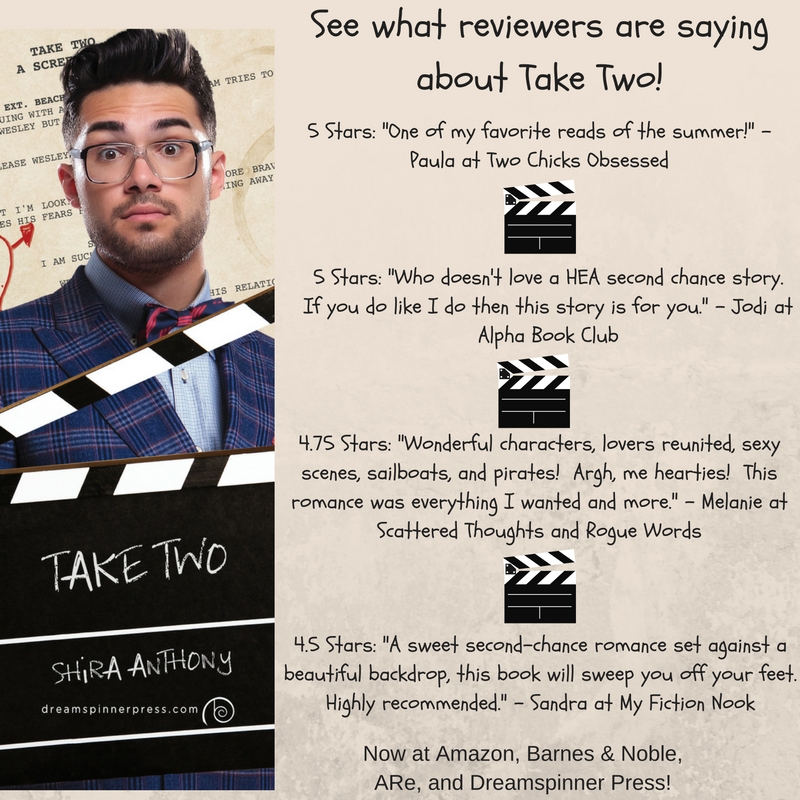 Take Two is here and it’s getting great reviews! I’m so happy to share just a few of the comments reviewers have made about the book.

Take Two is a second chance at love story set during a movie shoot. It’s a sweet, poignant, slightly angsty, and sometimes funny story about love that won’t quit, and includes anachronistic pirates, silly dialogue, and general mayhem as action star Sander Carson, a.k.a. Sam Carr, tries to woo back his estranged husband, pirate expert and history professor Wesley Coolidge. To celebrate the release, I’m taking readers on a tour of Bald Head Island, where the book takes place. You can watch all the videos on my YouTube channel.

I hope you’ll enjoy this lighthearted romp and that you end up believing in second chances! The book is now available at Dreamspinner Press, Amazon, and all the usual suspects. -Shira

Blurb: Shiver me timbers! When Professor Wesley Coolidge accepts a summer job as a historical consultant to a pirate movie being filmed in North Carolina, the last person he expects to bump into is his soon-to-be ex, movie star Sander Carson. Just like the flamboyant pirate he’s playing, Sander, aka Sam Carr, is used to getting what he wants, and he makes it clear he wants Wesley back in his life.

Sam acknowledges it’s his fault they split up. He lost Wesley when he left their life in New York City behind for a career in Hollywood. But Wesley has finally managed to put the pieces of his heart back together, and he isn’t interested in Sam and Wesley: The Sequel. Sam soon realizes that convincing Wesley to give their relationship a second chance will take much more than apologies and reminders of good times past. If he wants Wesley back, Sam will have to show Wesley that they really can sail into the sunset together–a real-life happily-ever-after that won’t end once the final credits roll.