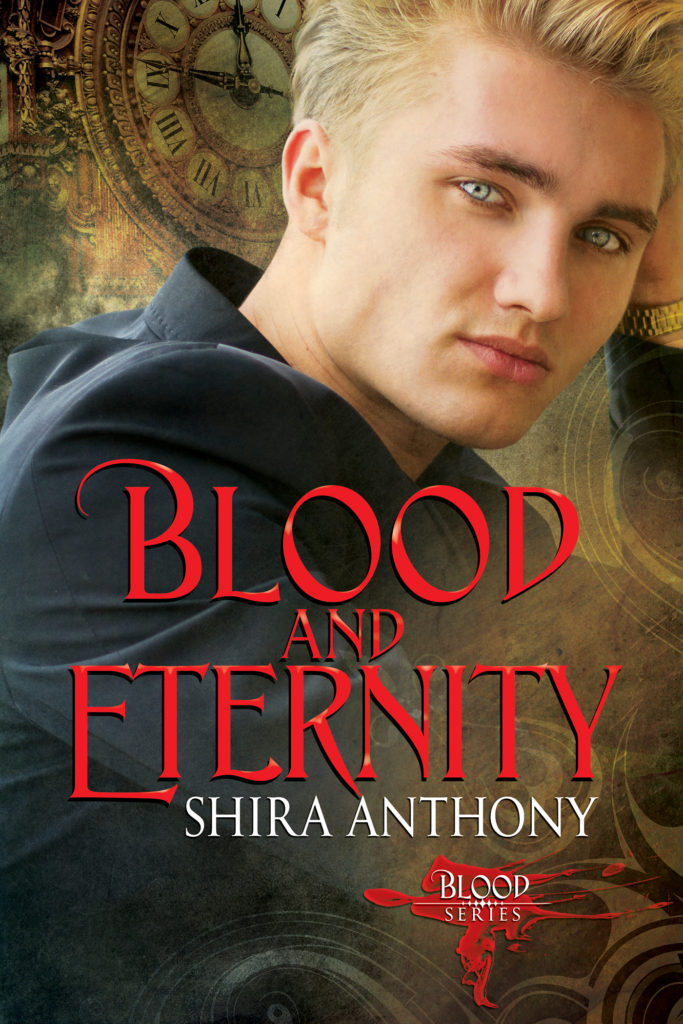 Part of the Blood series:

The time has come to make a choice—one they will live with for eternity.

In this final installment in the Blood Trilogy, Adrien and Nicolas must face their greatest enemy in a deadly last confrontation. But to prevail, they’ll need to master the enemies within.

Adrien luxuriated in the soft sheets and wiggled his toes as raindrops gently tapped against the windows. The distant sounds of Miami traffic reached the high-rise apartment as more of a pleasant hum than an echo of the chaos in the streets below.

Adrien yawned and glanced at the man who slept naked beside him: Nicolas. No, his name is Nico. One of the last few surviving ancient vampires. A man whose friends and family—with the exception of his adopted brother, Jean Lambert—had been murdered in a brutal massacre at the Council of Hunters.
There would be no more ancient vampires born in this timestream. But in spite of the bleak world he’d grown up in, Nico was much like the Nicolases Adrien had known—kind, gentle, and loving.

If you choose to stay here, I won’t get in your way. Keep your sweet vampire. Live your perfect life.

Adrien hadn’t deleted the text, but he hadn’t looked at it again either. He didn’t need to; he’d memorized Pelletier’s warning.

Fuck the bastard. He decided even before he’d received Pelletier’s text that he’d stay here with Nico. He hadn’t spent the past century searching for Nicolas only to abandon him for the empty timestream he’d come from. It didn’t matter that Pelletier had probably brought him to this place—the choice to stay was his own. He’d keep Nico safe. All that mattered was Nico.
He kissed the bare skin of Nico’s back. The soft sigh he received in response made him shiver.

“Morning.” Nico rolled over and smiled at him.

“Mmmm.” For once, the low thrum of Adrien’s bloodlust felt warm and comforting, like Nico’s expression.

“Worried I might not be here when you woke?”

“The thought crossed my mind.” Adrien wrapped his arms around Nico’s waist.

“You worry too much.” Nico pressed his lips to Adrien’s neck—more a tantalizing promise than an invitation since they’d shared their blood again the night before. The press of Nico’s cock on Adrien’s thigh, however, demanded an answer.

“I love the rain,” Adrien said as he squeezed Nico’s ass and pulled him closer. “It’s a great excuse to—”

Nico’s cell played “Thunderstruck.” Nico sighed and reached over the side of the bed, casting about with a hand for his jeans. “Shit.” He snagged the phone after it stopped ringing and frowned at the screen. “Sorry about that.”

Hearing Jean’s name stung, once again bringing back the memories Adrien had seen in Nico’s blood. Roland’s death. The massacre at the Council of Hunters. Once revealed, memories left an indelible mark.

Nico answered and sat on the edge of the bed. Adrien had hoped he and Nico might share a few more moments of peace before reality replaced fantasy. He’d been naïve.

Adrien threw on a pair of sweatpants and walked over to the window. Rain fell over the city, creating long streaks of dark against the brightening sky like the legs of a giant spider. Adrien shivered and tried to think of something more pleasant.

“I’m so sorry. I should have called. Something came up unexpectedly and I…,” Nico was saying as Adrien grabbed his own phone and headed down the hallway to give Nico privacy.

He tapped the screen. Still no service. And yet the message from Pelletier remained: If you choose to stay here, I won’t get in your way. Keep your sweet vampire. Live your perfect life.
Something was off. He’d only been here a few days, but he was sure he was missing something about this place. Something about this timestream didn’t make sense. As if any of this makes sense!

Adrien jumped at the sound of Nico’s voice. He’d zoned out again. He couldn’t blame it on the time travel; he’d been here long enough to adapt. The unease he’d felt when he’d arrived had only deepened. It was starting to affect him, pull his focus.

Nico rubbed Adrien’s shoulders. “I didn’t mean to startle you.”

Adrien sighed. “I’m a little tired.” A little jumpy. A little… something. I’m just not sure what.
Adrien expected Nico’s concerned frown. “Adrien, I—”

“Please don’t apologize.” Adrien forced a smile. “Whatever… however things are now isn’t your fault.” What the fuck was he doing, making Nico feel like shit about something he had no control over? This is my problem. My choice.

Nico pulled Adrien over to the couch and they sat, side by side, thighs pressed together. The contact felt good. Reassuring. The only thing normal in a fucked-up world.

Adrien hated the pain he saw in Nico’s gaze. Had he put it there?

“I’m not sure,” Adrien answered. “Honestly,” he added as Nico frowned again. He held up the phone and studied it. “There’s something about place—this time—that feels strange.”

Adrien nodded. “I haven’t had cell service since I got here.”

Nico laughed. “Isn’t that just proof you need to change your cell phone carrier?”
Adrien chuckled in spite of himself. “Maybe. But the building….”

“Before we met, I was headed to my office. But the security guard had never heard of me or my company.” Adrien rubbed the bridge of his nose. “May I use your cell?”

“Of course.” Nico handed him his phone.

Adrien opened the browser and typed Adrien Gilbert, then scrolled down the results. Nothing. He typed Gilbert Industries. Still nothing. He tried googling François Gilbert.

He hadn’t expected much. François had, over the years, changed his name to avoid questions. Adrien tried several of the other names François used. Not a single mention. A quick check of Charles’s names gave him nothing.

He felt more than heard Nico’s breath catch. “I’m sorry. I wish I knew what happened to them. In the aftermath of the massacre in Paris, many vampires went into hiding. Hunters too.” Nico kissed the top of Adrien’s head.

“None of this is your fault. I’m thankful you and Jean survived. Please don’t doubt that.”

“I’ve got a bad feeling about this.” How could he explain to Nico that this timestream felt completely different? That Pelletier had contacted him even though his phone still hadn’t connected with a network? He wasn’t sure he wanted Nico to know about that. Not yet, at least.
Adrien swallowed hard and typed Saint-Gervais Wines. Halfway down the list he read Gilbert, Benoît, one of the names his father had used over the years. He clicked on the link and sighed with relief to see his father’s face.

Adrien nodded. “It’s been in my family for hundreds of years.” He clicked on the link beneath the photograph, but the page only displayed the address of the vineyard. No link to a webpage. Not surprising, since his father detested the internet. Doesn’t mean he’s alive. Or dead.

“I’d love some.” Adrien barely glanced up from the screen.

An hour and two cups of strong coffee later, the only thing of interest he’d found on the web was a casual mention of a Benoît Gilbert at a regional wine-tasting conference held in Lyon in 1998.

Nico glanced over his shoulder from the kitchen, where he’d begun to make their breakfast. “Your father?”

“Yes. But nothing of anyone else.” Adrien tilted the phone so Nico could better see it. “Nothing about me. Nothing at all. And you don’t remember meeting me….”

“I don’t recall having met you,” Nico agreed. “But that doesn’t mean anything. There are plenty of hunters I’ve never met. Hunters who fought on our side and survived the massacre.”

“You said you and Jean buried Roland.”

Nico eyed him cautiously. “We…. Yes. We buried him at a small church near the Rousseau castle. But why—?”

“Did my father come?”

“Jacques? Yes.” Nico’s lips parted as though he’d finally understood. “But that doesn’t—”

“I would have come as well.” Much as he’d struggled with his feelings for Roland, Adrien loved him like a father.

“I’m sure there’s some good explanation for why you didn’t come.” Nico sounded far less sure than before.

Adrien shook his head. “There’s only one explanation for my not being at my father’s side. The reason my phone doesn’t work. Why my company doesn’t exist.” He drew a long breath. Say it. Just say it and get it over with. “I don’t exist in this timeline. Not anymore. I died, Nico.”

4.5 Hearts - "Great ending with intense battles. The different timestreams added the extra bonus of seeing what could happen if things were left as they were. I really enjoyed this story and will some time in the future re-read to get the full story... Great read."