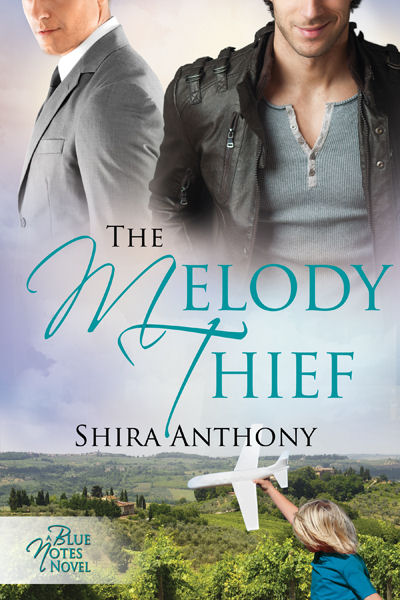 Cary Redding is a walking contradiction. On the surface he’s a renowned cellist, sought after by conductors the world over. Underneath, he’s a troubled man

flirting with addictions to alcohol and anonymous sex. The reason for the discord? Cary knows he’s a liar, a cheat. He’s the melody thief.

Cary manages his double life just fine until he gets muggedon a deserted Milan street. Things look grim until handsome lawyer Antonio Bianchi steps in and saves his life. When Antonio offers something foreign to Cary—romance—Cary doesn’t know what to do. But then things get even more complicated. For one thing, An

tonio has a six-year-old son. For another, Cary has to confess about his alter ego and hope Antonio forgives him.

Just when Cary thinks he’s figured it all out, past and present collide and he is forced to choose between the family he wanted as a boyand the one he has come to love as a man.

Note: Book #2 in the Blue Notes series. The series can be read in any order. Each is a stand-alone story from the same classical music universe. Musical Soundtrack for “The Melody Thief”

Elgar Cello Concerto -http://www.youtube.com/watch?v=RM9DPfp7-Ck (and this one is with the Chicago Symphony!)